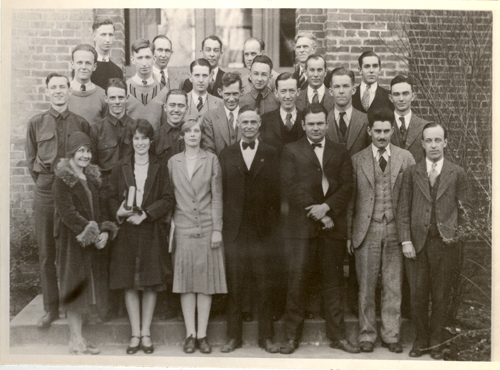 Entomology was among the first subjects taught at the University of Maryland. With a rich history of more than 100 years, the Department continues to thrive and grow.

1860 - Renowned entomologist, Townend Glover, becomes one of the first five faculty members. As the first federal entomologist, his title was "Entomologist for the United States, Professor of Natural History, Botany and Pomology."

1897 - The Department of Entomology and Zoology is created at Maryland Agricultural College.

1978 - IPM program moves out of pilot phase and is self-supporting. Urban IPM programs begin to develop.

1993 - The College of Life Sciences is formed, with four departments: Zoology, Chemistry and Biochemistry, Cell Biology and Molecular Genetics, and Entomology.

As the department formed in 1897-1898, research and regulatory applications were directed at pests such as the San Jose scale, including the publication entitled, "A plain talk with those who have San Jose scale to combat." Entomologists at the University of Maryland continue to provide research, teaching, and extension on applied aspects of entomology, but our interests have expanded to include fundamental issues of arthropod biology from the molecular to the ecosystem level.