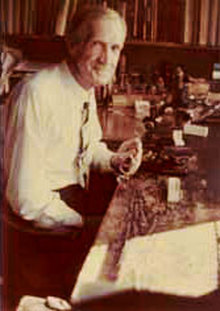 The Gahan Fellowship is intended to stimulate excellence in graduate research in the Department of Entomology. This award, established in 1981, was made possible through a series of gifts and bequests to the department by James B. and Margaret Gahan, and James' sister, Winifred. The endowment honors the late Arthur B. Gahan, who was a Professor of Entomology at the University.

About Arthur Gahan
​Arthur Gahan was one of the University's first graduate students in entomology. He arrived at College Park in 1904 and, after receiving his M.S. in 1906, stayed on as a faculty member, teaching here until 1913. Arthur was also a very active member of the community, both on and off campus. He coached the first UMD basketball team, and in College Park he was one of a small group who worked to put the Branchville Volunteer Fire Department on a firm footing. In 1913 Arthur took a position with the Bureau of Entomology at the U.S. Department of Agriculture and was assigned to the National Museum, where he continued his research on the taxonomy and biology of parasitic Hymenoptera until his retirement, becoming a world authority on Chalcidoidea. In 1922 he served as president of the Entomological Society of Washington.

Following in their father's footsteps, Winifred and James both spent their entire careers at the USDA. After receiving his BS (1930) and MS (1932) in Entomology from the University of Maryland, James Gahan became a leader in the development of effective methods for deploying insecticides against insects vectoring disease, receiving a War Department commendation for his role in the dramatic reduction of the incidence of malaria and other mosquito-borne diseases among U.S. troops during World War II and in tropical countries during the immediate postwar years.

Winifred Gahan also went to college at Maryland, graduating in 1931. At that time, women were a small minority of the student body. Winifred initially majored in mathematics but eventually switched to home economics. However, her excellent math skills served her well in a career working with statistics for the USDA. Winifred also led an active life in the community, including being a life-long member, Sunday school teacher and benefactor of Berwyn Presbyterian Church.

Arthur Gahan's research papers are housed in the Maryland Room of the Hornbake Library.

Fellowship Details
​Gahan Fellowship are available exclusively to Entomology Department graduate students and are administered by the department. Gahan Fellows are distinguished by excellence in research creativity and productivity. The fellowship consists of a full stipend, a supplemental half-time assistantship in order to provide health benefits, summer support provided by the major advisor, and tuition remission up to a maximum of 10 credits per semester. Though the fellowship may be awarded to graduate students at any point during their tenure in the department, preference is given to finishing Ph.D. students in their final 1 or 2 years of graduate study.