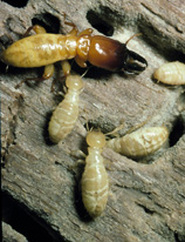 PROGRAM DESCRIPTION: My research program focuses on the biology of termites, including studies in evolution, genetics, population biology, behavioral ecology, taxonomy, and systematics.

Termites are highly social insects that form complex colony structures with some aspects convergent to, and others that differ from, the paradigms of social organization and evolution established in the phylogenetically distant Hymenoptera (ants, bees, and wasps). Our current research projects center on novel theoretical and experimental approaches to investigate the origin and maintenance of eusociality in termites. Eusocial colonies are cooperative societies composed mainly of subfertile or sterile members, regarded as an evolutionary paradox because they seem to conflict with Darwin's concept of reproductive self-interest. Recent results offer genetic evidence supporting the theory of Accelerated Inheritance as a driver of eusocial evolution in termites. In studies of the primitive dampwood termite Zootermopsis nevadensis, we discovered that offspring from both original colonies can take advantage of early death of some kings and queens in intercolony interactions that naturally occur in the field. Following meetings between neighboring colonies, established reproductives die, and workers from both families can differentiate into new reproductives and even interbreed. Because interacting colonies are unrelated, these results demonstrate that cooperation can evolve due to ecological circumstances without strong relatedness among individuals. These Accelerated Inheritance opportunities provide selective incentive for offspring to remain in their parents' colony rather than attempt the high risk of dispersal and low risk of independent reproductive success.
There is also an applied aspect to the program. We integrate results of basic research with the development and testing of new technologies for suppression and control of termites. The goals of this approach are to more precisely target and effectively impact termites, thereby reducing pesticide use and exposure around homes. Evaluation of inspection and treatment programs using termite baits is an example of this link between basic and applied research.

Since September 2012 I have served as Science Advisor for the Florida Department of Agriculture and Consumer Services' efforts targeting the exotic "Conehead Termite" (Nasutitermes corniger). This species was the focus of my Ph.D. research in Central America ‘back in the day,' and I have since studied it in South America and the Caribbean. When asked by the state of Florida to get involved in trying to put the brakes on this infestation I felt I had to do my best to step up and help out. Here is a brief status report from "Coneheadquarters" :

The exotic conehead termite, Nasutitermes corniger, was discovered in Dania Beach, Florida (Ft. Lauderdale metropolitan area) in 2001. These adaptable termites have potential to infest structures and natural habitats across a broad geographic range, with decisive economic consequences. Coneheads have expansive tastes, eagerly consuming dead wood from trees (including citrus), shrubs, roots, structures, and furniture as well as cardboard and other paper products. Eradication of this invasive species may be possible because older colonies build conspicuous foraging tunnels and nests, so unlike subterranean termites, careful inspection can reveal conehead activity.

Several neighborhoods and natural areas, all within Dania Beach, are the focus of Florida's Department of Agriculture and Consumer Service's aggressive inspection, containment, and control efforts targeting these termites. The program has made substantial progress controlling the termite on residential properties, although continued vigilant monitoring is essential because, especially as young colonies, coneheads may occupy an area for years before showing visible signs of activity.
Eradicating coneheads from overgrown woodlands and wetlands is an immense challenge. The key strategy is to clear and remove enormous quantities of dead cellulose (trees, shrubs, grass, litter) that coneheads use for food and harborage. Removing debris from natural areas has helped deplete termite food, and also facilitates improved inspections and termiticide applications.
Intensive actions are urgent to halt the species before it spreads further and becomes a powerfully damaging, expensive, obnoxious, and permanent pest. 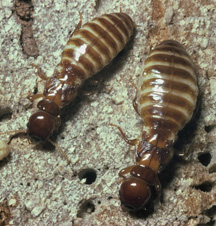 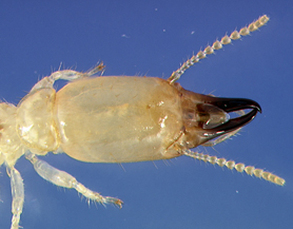 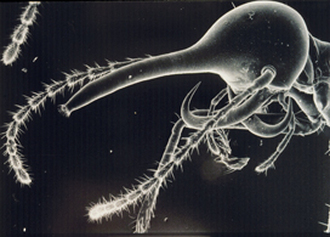 Education
Back to Directory